Security Sector Reform (SSR) aims to enhance Security Sector Governance (SSG) through the effective and efficient delivery of security under conditions of democratic oversight and control. SSR offers a framework for conceptualising which actors and factors are relevant to security in a given environment as well as methodology for optimising the use of available security resources. [1]

What is Security Sector Reform?

SSR is generally defined as a process of transforming the security sector to strengthen accountability, effectiveness, and respect for human rights and the rule of law. The security sector is a broad term used to describe the structures, institutions and personnel responsible for the management, provision and oversight of security in a country.[2] SSR strives toward improving Security Sector Governance (SSG), a term referring to the multi-stakeholder oversight process by which a security sector is internally and externally governed.

Good Governance in the Security Sector:

Why is it important?

SSR assumes that effective and democratic security delivery is fundamental for reducing poverty and for sustainable economic, social and political development.[4] SSR’s main objective is to attain an effective, efficient and well governed security provision system. SSR aims to ensure that the appropriate level of resources is attributed to the security services so that the rest can be duly invested into social and economic development. A functional security sector is a precondition for democratisation. A well-functioning security sector contributes towards regional stability and enhances opportunities for international cooperation.[5]

How does it work?

SSR is a coordinated series of actions designed to improve the efficiency and effectiveness of a state’s security sector. These actions can be comprised into the following steps or phases: 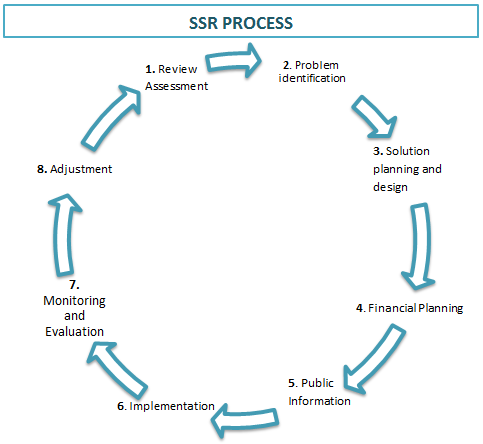 According to CIDS’s Integrity Action Plan, a comprehensive SSR process will examine all of the following main areas and reform/adjust where necessary in accordance with the principles of good security sector governance:

Centre for Integrity in the Defence Sector (2015) Guides to Good Governance.

NATO-DCAF (2010), Building Integrity and Reducing Corruption in Defence: A Compendium of Best Practices.