Law enforcement is the task of ensuring the provision of security for citizens going about their daily lives, in accordance with a nation’s legal framework, mainly through deterrence and prevention, but also by appropriate interventions to stop violations of the law. Law enforcement is carried out mainly by police, which is defined as a civil force responsible for prevention and detection of crime and maintenance of public order. The term ‘police’ therefore includes all law enforcement agencies: national, local, and specific services that exercise police powers, for example, community police, detective and investigations branches of the police. The police are an integral part of the criminal justice chain that links together state security and justice provision.[1]

What is Effective Law Enforcement?

In the context of good Security Sector Governance (SSG), effective law enforcement means that police organisations and personnel have the capacity to provide state and human security within a framework of democratic civilian control, and respect for the rule of law and human rights.[2]

Why is democratic oversight important for effective law enforcement?

It is a widely accepted norm that the public should have control over their government and public services including the police. This is vital for ensuring that public services respond to the needs of the public and police do not engage in activities harmful to the interests of the public (such as corruption). In democratic countries, the public, primarily, controls the police (and other government agencies) indirectly, through their elected representatives. However, the public can also have direct contact with the police via a variety of platforms including community policing boards. The other essential component of democratic governance is oversight and monitoring. By establishing, appointing, and reviewing the work of police oversight bodies, parliaments create a link between the public and the police. External monitoring and oversight are crucial for fostering transparency and accountability and thus boosting public trust in law enforcement institutions and the state itself.

Another important issue is to ensure the integrity of employees in the law enforcement sector. Widespread corruption among police and other law enforcement providers has been a feature of many policing systems: as police play a crucial role in public safety and have frequent interaction with citizens, the ‘corruption curse’ can become an endemic feature of daily life. In the eyes of the public, if police cannot be trusted, there is no other obvious agency to which the public can turn to uphold the law and maintain public order. Moreover, police corruption gives a bad example for society. To encourage respect for the law, the state must ensure that those who are responsible for implementing the laws are positive role models.[3]

Additionally, a significant portion of police activity occurs out of sight and is, therefore, less transparent. This is rendered even more dangerous by frequent contact with criminal sections of society including drug and human traffickers. Thus, the law enforcement sector has a high corruption risk due to all these characteristics. Thus, special attention must be paid to building integrity efforts within the police force.

How do external control and oversight work?

Sanctions for corrupt and unethical behaviour must be taken seriously and widely publicised, at the very least within the police establishment itself. Naming and shaming is also a useful tool to ensure a common understanding that corrupt behaviour is unacceptable and that will be addressed. In order to guarantee effective sanctioning of offenders, the monitoring and enforcement system must be strong and a comprehensive legal framework in place. Legislation must define in detail which practices are considered corrupt, unethical, and inappropriate.

Administrative measures to build integrity within the police force can be undertaken at the recruitment phase and also via personnel rotation. Law enforcement personnel should be recruited and promoted by means of competitive examinations and appointments should be made on the basis of qualifications and suitability for the position. Clearly pre-defined criteria for appointing police officers, such as minimum educational standards, should be outlined. Aptitude tests should that measure both physical skills and psychological skills, especially when it comes to judging candidates’ attitudes towards violence, inappropriate behaviour, and his/her capacity to decide on a suitable course of action in a crisis situation.[5]

Rotating police personnel from one department to another as a way of reducing opportunities for the development of overly comfortable relationships with fellow workers is another way of reducing corruption risks. However, rotation can affect police efficiency by lessening institutional memory and decreasing the advantages of experience. Thus, a cautious and practical approach is required. Special attention must be paid to departments that deal with highly profitable long-term criminal activities. Such departments are more likely to develop unethical behaviour due to a lengthy exposure to corruption opportunities and the perception of easily available and significant short-term rewards.[6]

Some experts have argued that salaries for personnel should be determined in legislation and paid according to grade and seniority rather than quality and quantity of work actually performed. Salaries must be paid regularly, in full and take into account working conditions in order to prevent unethical behaviour on the grounds of unjust remuneration. Additionally, the system, as a whole, should be monitored by strong control mechanisms and institutions.[7]

State support given to the police will also impact levels of loyalty and ethical behaviour. State support can include both positive (such as recognition and appreciation) and negative reinforcement mechanisms (fair and effective sanctions).

Improving the gender balance within the police workforce may also contribute to prevent corruption since as evidence exists that units of the same sex are more prone to establishing informal corruption networks. Therefore, networks of corrupt collaboration are harder to form and less likely to expand.

Codes of conduct are a very important tool to curb corruption and build integrity in law enforcement. They should be visible and accessible. They should also be supported and promoted by senior personnel.

Integrity is something that should be taught and promoted on a regular basis within the police force. This can be done via seminars and trainings. Presentations should raise awareness about the importance of integrity and the risks of corruption, explain and promote codes of conduct, and constitute a forum where concepts are explained and knowledge is constantly updated. As corruption is a complex and changing concept, current awareness needs to be defined and revised continuously. Occasionally activities that may not have previously been considered corrupt may become unacceptable. It is therefore crucial to keep this information on best and worst practices up to date. Moreover, it is important to explain not only the devastating effects of corruption on public safety, general wellbeing, and state development; but also the individual implications of engaging in corrupt practices and sanctions that offenders will face. It is imperative to make the case that the rewards of corruption are not worth the risks undertaken to obtain them.

Additionally, public-awareness campaigns organised by the state are a powerful educational tool. They should aim to explain what corruption is and why it is unacceptable. Moreover, they are a great opportunity to present to the public the best channels for communicating known, or suspected, cases of corruption to the authorities. 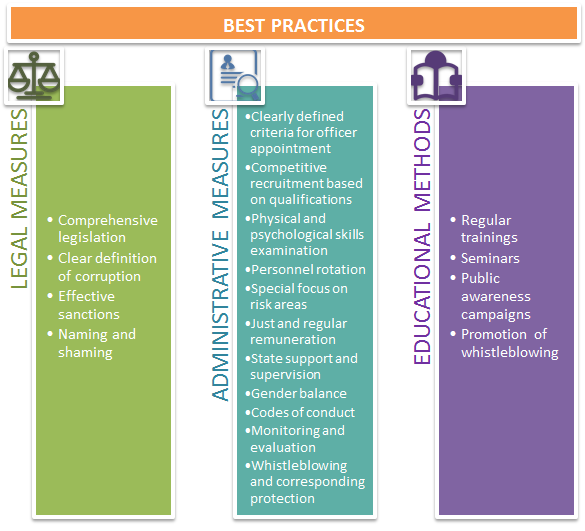 Several different institutions and stakeholder groups are involved in the external oversight and democratic control of police services: the executive, the parliament, the judiciary, specialised police oversight and anti-corruption bodies, ad hoc inquiries, civil society, and the media.

Building integrity measures within the police force is a matter concerning, first and foremost, the police personnel itself. Internal control and supervision entities play a crucial role by enforcing codes of conduct and sanctioning inappropriate behaviour. National governments via anti-corruption commissions, for example, are responsible for the oversight of corruption in the state sector, in general, and in the police force, in particular, as the ultimate authority and primary funder of police services. International organisations play a variety of roles in the struggle against police corruption, such as providing common definition of corruption, best practices, expertise, trainings, and advice, as well as imposing sanctions. Civil society, media, and other non-state actors can contribute considerably to reducing police corruption by informing the public and raising awareness, as well as by establishing channels of communication between the public, the authorities, and the police. Whistleblower protections can be absolutely vital in ensuring a means for staff to come forward and report wrongdoing.

Centre for Integrity in the Defence Sector. Criteria for good governance in the defence sector. International standards and principles (2015)

Centre for Integrity in the Defence Sector (2015) Guides to Good Governance.