There is no universal definition of corruption. Transparency International (TI) defines corruption as “the abuse of entrusted authority (public or private) for illegitimate (private or group) gain”. This definition is widely accepted. However, it is important to bear in mind that corruption is highly contextual; therefore perceptions and understanding of what constitutes corruption vary accordingly. Centre for Integrity in the Defence Sector (CIDS) identifies corruption as practices within an institution that compromise that institution’s capacity to perform its functions in an impartial and accountable manner.[1]

What is corruption in defence and security?

Corruption within the security sector may take many forms, such as: kickbacks and bribes, awarding of non-competitive contracts or manipulations of soldier payrolls, misuse of budgets, and the use of military resources to generate off-budget profits.[2] The recent and rapid growth of private military and security companies, performing activities previously within the realm of the state that are outsourced in accordance with limited regulations, has further increased opportunities for corruption.[3] Mats R. Berdal and David M. Malone distinguish three types of corruption:

Why is corruption an important risk?

Corruption hinders the development and undermines the security of modern societies. Corruption undermines public confidence in the institutions of the state. Corruption particularly impedes the progress of countries in transition, stealing much needed resources from state-building endeavours. Resources provided through corrupt practices are often transformed into economic and political influence, thus weakening democratic institutions and further expanding corruption. Defence sector often provides a fertile ground for corrupt activities due to a culture of secrecy and impunity that shields it from rigorous scrutiny.[6]

Furthermore, corruption corrodes efficiency and effectiveness of the armed forces. Low troop morale and inadequate equipment contribute to higher casualties on the field, which can compromise broader national security objectives. The military see their budget reduced as fewer resources are allocated to a group that is perceived to be corrupt. This triggers even more corruption as groups compete to secure their share of scarce resources, leading to a vicious cycle of corruption.

How does corruption affect defence the security?

Who is affected by corruption? Who can fight it?

Main areas affected by corruption in defence and security are:

Additionally, Transparency International (TI) identifies a political dimension of the security sector that is prone to corruption. In this sense, security policies; the nexus between defence and national assets; control of intelligence services and other planning and policy procedures, such as a National Security Strategy, can potentially become a source for corruption when conducted with no regard to legal boundaries.[9]

Corruption affects all levels of security and defence personnel and can take the form of: theft, extortion, bribery, and influence networks. Factors such as: lack of transparency (secrecy culture), operational urgency, lack of oversight mechanisms and absence of adequate rules and regulations can create an atmosphere prone to corrupt deviation of financial and other resources. In this context, whistle-blowers play a crucial role in signalling infractions. Oversight committees, ombuds institutions and inspectors are essential in combatting corruption. Their presence alone exercises a preventive effect. Parliament, the ministry of defence and other ministries, civil society, media and academia can all play an important role in fighting corruption. Additionally, international organisations and other states can provide guidance, best practices and international standards.[10] 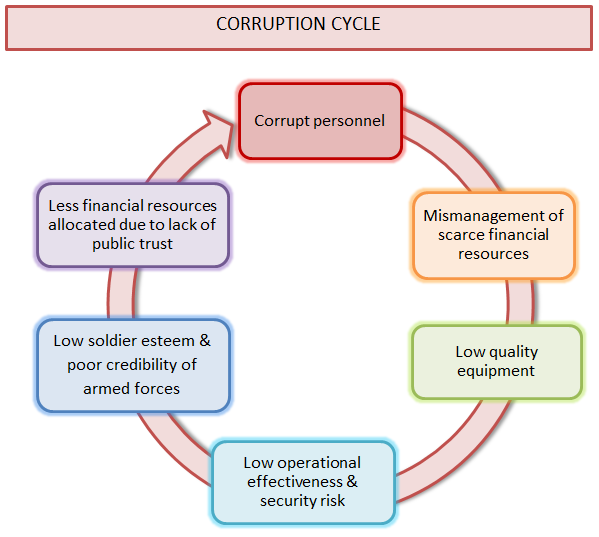 CIDS (2015) Guides to Good Governance: Professionalism and integrity in the public service. No 1.

NATO-DCAF, (2010). Building Integrity and Reducing Corruption in Defence: A Compendium of Best Practices.