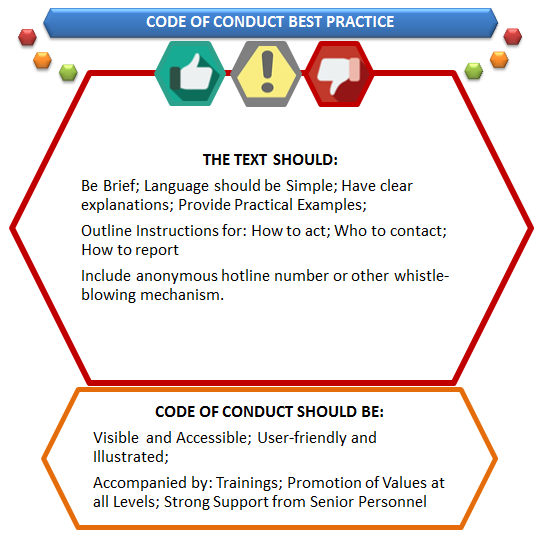 Codes of Conduct are a set of rules and recommendations that can be adopted by companies, national and international organisations, private groups, etc. They seek to guide the behaviour of their members by establishing ideals and values, describing what is considered moral, ethical, and honourable, offering recommendations and support in the face of sensitive situations, and providing channels for communicating abuse. Their aim is to deter corruption and contribute to a more ethical environment.

What are Codes of Conduct?

Codes of conduct in the defence and security sectors build on the specific corporate culture of the military and other security establishments. They consist of a series of directives, rules, and regulations describing what is considered as ethical behaviour of personnel, what to do when faced with a delicate situation that may result in corruption, and how to report corrupt actions of others. Codes of conduct, usually, consist of a list of articles. Although they can vary from country to country, the most common topics are:

OSCE Code of Conduct on Politico- Military Aspects of Security is a Code of Conduct applied on an international level. In the setting of the Organisation for Security and Co-operation in Europe, it outlines the duties and guiding principles of its member and participating states.

The Model Code of Conduct for Public Officials, developed by the Council of Europe in its Recommendation No. R. (2000) 10 can serve the same purpose.

Additionally, OECD has issued a Convention on Combating Bribery of Foreign Public Officials in International Business Transactions, which constitutes a crucial reference document when it comes to codes of conduct in the sphere of resource management in defence.

Finally, a great national example is the Norwegian Code of conduct: Ethical Guidelines for Contact with Business and Industry in the Defence Sector. Published in 2011, it is a short, clear-cut text, well-illustrated and easy to read.

Why are they important?

Codes of Conduct and other voluntary guidelines make a real difference in the security-sector institutions because the majority of military and other serving personnel take great pride in serving their nation and the security sector establishment. Honouring the ideal of such an establishment is part of the military culture. [1]

Although some are less evident than others, the forms of corruption are many. In order to avoid confusion and omission, there should be a clear statement on what is expected from personnel, what is and is not acceptable, and how to avoid and deal with conflicting situations. This should be supported by a global adherence to the established standards of behaviour. Senior officers and officials set the example by promoting codes of conduct as the central component the security sector establishment.

How do they work?

According to Transparency International (TI), the ideal guidance framework for defence officials and members of the armed forces is comprised of three core components: a legal framework with its ethical guidance, the code of conduct, and a statement of values. The legal framework is composed of an array of legal statutes, civil service acts, and disciplinary and penal codes. Since these documents are often written in a technical language, they should be accompanied by guidance notes for better understanding. The code of conduct is a set of behavioural norms and common values. It should be clear, brief and accessible to all members of the security sector establishment. The statement of values is an independent, distinct declaration which articulates an organisation’s overarching ethical principles and compliments the code of conduct. It should be widely distributed and promoted by senior officials.[2]

The effectiveness of these documents depends on their visibility and user-friendliness. It is absolutely crucial that they are introduced and studied at the earliest stages of the security sector career with regular refreshment and integrity training sessions provided to all security sector personnel.

Some of the key components of the Code of Conduct, as described by TI in their multi-country study, are listed below:

BRIBERY: Clear explanation of what is considered bribery and instructions for how to act and who to contact if offered a bribe; procedures for official reports on bribery to be investigated and procedures for notifying external prosecutors.

GIFTS AND HOSPITALITY: Clear definition of acceptable gifts and rules for their acceptance; practical guidance with real-life examples; clear procedures for officials when confronted with an ethical dilemma; readily identifiable chain of command; procedures for proper disposal of gifts.

POST-SEPARATION REQUIREMENTS: Obligation to request a formal permission from previous employer to accept offers of employment elsewhere (during 2-5 years); exclusion of gifts not related to official employment received from prohibited sources (for 2 years after leaving); reporting of such gifts. 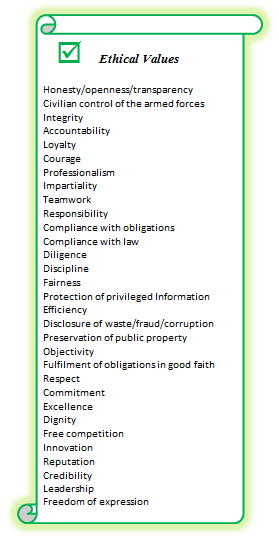 The success of the Codes of Conduct also depends on the mechanisms for reporting and consulting that are in place, the general approach to the importance of ethical behaviour within the establishment, and the importance of flagging improper behaviour. As OECD points out, effective internal controls, ethics, and compliance programmes should be in place, as well as a clearly articulated and visible policy prohibiting unethical behaviour. This must be accompanied by a strong, explicit, and visible support and commitment from senior management.[4]

Centre for Integrity in the Defence Sector. Criteria for good governance in the defence sector. International standards and principles (2015)

Centre for Integrity in the Defence Sector: Guides to Good Governance

CIDS (2015) Guides to Good Governance: Professionalism and integrity in the public service. No 1.

Council of Europe, Convention on Laundering, Search, Seizure and Confiscation of the Proceeds from Crime and on the financing of Terrorism.

Council of Europe, Convention on Laundering, Search, Seizure and Confiscation of the Proceeds from Crime.

Council of Europe, Recommendation No. R. (2000) 10 Model Code of Conduct for Public Officials

DCAF (2012), Ombuds Institutions for the Armed Forces: a Handbook.

OSCE Code of Conduct on Politico- Military Aspects of Security

Royal Norwegian Ministry of Defence (2011) Ethical guidelines for contact with business and industry in the defence sector.

Transparency International, (2011) Codes of Conduct in Defence Ministries and Armed Forces. What makes a good code of conduct? A multi-country study.

[1] NATO-DCAF, (2010). Building Integrity and Reducing Corruption in Defence. A Compendium of Best Practices.

[2] Transparency International, (2011) Codes of Conduct in Defence Ministries and Armed Forces. What makes a good code of conduct? A multi-country study.